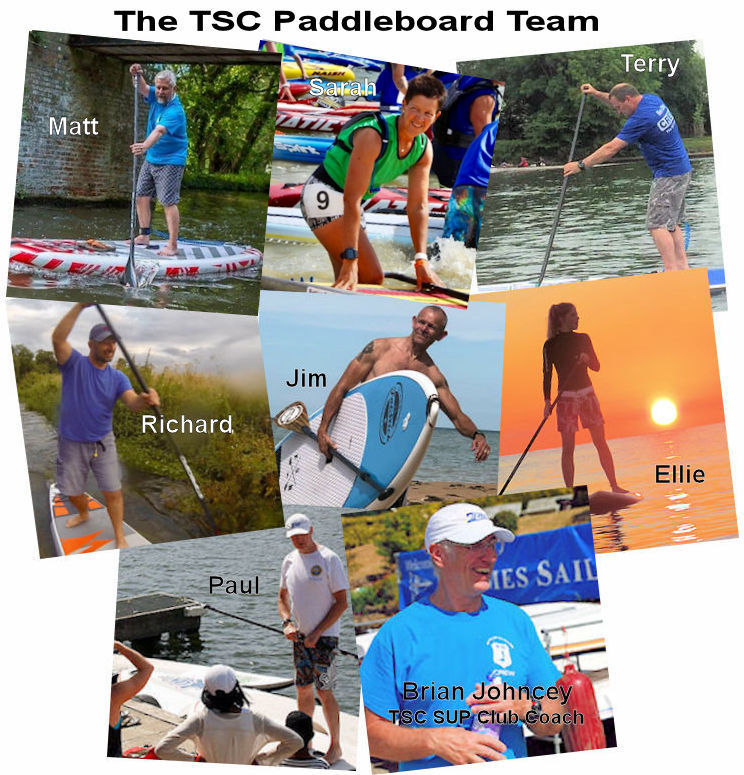 The original Paddleboard School started in 2008 by Brian Johncey soon built up a reputation of excellence and fun training, being the first ASI qualified school in Europe. The school established a great relationship with Thames Sailing Club in Surbiton in 2010 where it remained until 2019, following the sale of the school the new owner and has now relocated.

TSC Paddeboard School instructors have all maintained their ASI and or British Canoeing qualifications, our paddleboard instructors are certified "Paddle-Safe, Safeguarding and Best Practices" along with first aid qualifications.

Matthew first started paddle boarding in 2011 with a lesson from Blue Chip, since then he has paddled in Spain, Greece, Switzerland and the UK. Although more focussed on touring and the Wednesday evening Blue Chip outings, Matthew has competed in several races including the UK Club Championships in 2014.

Matthew became an ASI instructor in 2014 and thoroughly enjoys the Saturday morning teaching sessions watching others get the same enjoyment of this marvellous sport he has had for the last four years.

In 2017, Matthew qualified as a British Canoeing SUP Instructor so is very experienced and highly qualified.


Sarah has been paddling since 2012 having been inspired by another Blue Chip instructor. She completed her Water Rescue Course and ASI Instructor Course in 2014 and since then has thrown herself into teaching with Blue Chip regularly on a Saturday morning. Sarah also qualified as a British Canoeing SUP Instructor in 2017. She raced for five years culminating in jointly winning the overall season trophy in the 14' class in the National Championships 2017. She has raced flatwater, technical, sprints, competed in the famous SUP Nautic Race in Paris and entered many supbikerun events in the UK. She has taken her Red Paddle 12'6" inflatable all over the world and competes on a 14' Starboard Allstar and Naish Maliko. She has recently taken up Outrigger Canoe, SUP surfing and runs Supjunkie with her husband, which reports on races all over the world and the UK, including UKN1SCO and GBSUP National series.

Terry first paddled with Blue Chip in 2010 and has since paddled and competed in St John's Rush in Jacksonville Florida. Terry has also paddled in California, Zanzibar, Spain, France, Holland and Greece to name just a few locations. I absolutely love a challenge and am very conscious about the environment we paddle in so it's a real privilege to guide other into this new experience. Terry completed an ASI water rescue course in 2013 after finding a little more time on his hands qualified as a British Canoeing SUP Instructor in 2017 he supports and teaches at our Saturday morning Paddleboarding School. Terry has been first aid qualified for most of his life so you can be sure you are in safe hands.

Jim first paddled with Blue Chip in 2017 and since then has become a regular paddler taking part in the club adventure paddles including the Club white-water trips and the iconic Corinth Canal SUP Crossing in Greece.

Richard learnt to windsurf in 1983 and has travelled the world to find wind and waves.

In 2007, while out in the Hebrides, he borrowed a Starboard SUP from John Hibbard (before he founded Red Paddle Co.). The heavy board, big waves, paddle which kept coming apart and represented a baptism of fire on a SUP, which meant he wasn't entirely sold on the sport.
A few years later and with Brian's constant 'come and try these inflatable SUPs on the river, in the pool etc.' Richard bought his first paddleboard (with windsurf attachment just in case) and joined the Blue Chip SUPer Club weekly paddles. The penny finally dropped and now he does more Paddleboarding than windsurfing, enjoying the sports diversity from touring, to white water, surf & windsurf SUPing with the challenge of foil SUPing yet to be tried.

Paul first got on a paddle board in South Africa in 2010, since then he has paddled in Spain, Italy, the Maldives, Japan, Israel, South Africa, the UK and the Netherlands where he has twice completed the famous 11 Cities Race. Paul has been an ASI instructor since 2012 and regularly maintains his qualifications including Water Rescue. He is very attached to his Starboard Big Easy for teaching from. Paul teaches for the TSC Paddleboard School and/or supports on the Saturday morning taster sessions, as well as offering 1-2-1 lessons for those paddlers seeking to develop their technique and advance in the sport.

Ellie has been a Watersports enthusiast from the age of 5 when she started windsurfing with her dad. Ellie has been Paddleboarding since 2007 and became a British Canoeing SUP instructor in 2018, she often helps out and instructs at the TSC Saturday morning Paddleboard School and is a regular in the Real Blue Chip Super Club scene.

Ellie enjoys our SUP cruising adventures including the Mega Board and tandem paddling as well as SUP Surfing and has paddled in Amsterdam, France, Portugal, Spain, Thailand, Greece, Malta, USA and Italy. Ellie has also trained in Judo from the age of 5 and is a 1st Dan Black Belt.